Since we are getting DDoS'd anyway... 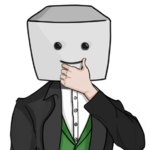