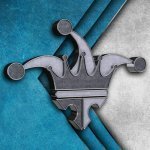 A lan cable has been disconnected (PS4)

By Madman, March 21, 2015 in Feature Ideas & Improvements for DumaOS