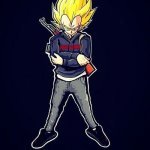 Still Connecting to Denied Servers on BO4 with the XR500